The store will not work correctly in the case when cookies are disabled.
Menu
Menu

How to Clean a Rimfire Rifle

How to clean a rimfire rifle

Cleaning a rimfire rifle shows similarities to a centrefire but does have a few different factors to consider. First off, it is to make sure the gun is unloaded and remove the bolt. You can treat these stages separately but it’s best to start on the barrel first so it can be `soaking` whilst attending to the other items on the list. It’s a great time to inspect everything as you go along so pay attention to any screws and fasteners that may have come loose. The slimmer 17 or 22 calibre bores of these rifles are almost the same as the chamber/case diameter so there isn’t a naturally wide `funnel` to feed a cleaning rod into or position a bore guide like a centrefire may use in its larger bottle shaped chamber so take care at all times to feed any cleaning rod through straight. It is possible to get action specific bore guides to align the rod but I have yet to see generic fit-all types as can be found for centrefires. Pull throughs are ok for an occasional clearance of general fouling but won’t clean deeply so a rod is beneficial. Given the small bore size, particularly with 17 HMR, you generally get all steel rods for mechanical stiffness with no space to spare for polymer jackets so beware of damaging anything with the rod, they are generally worse for guns if used incautiously than the bullets themselves!

I prefer spear point jags appropriate to the calibre and square or round patches to put a few drops of solvent onto and push them smoothly and carefully through the bore. Remove the moderator to prevent getting patches stuck in it! The patches you choose need to be a snug fit but not brutally tight. Looking at 22 rimfire first, the soft lead bullets and lubricants coating them create a lot of greasy or waxy fouling and it’s worth considering this contains a quantity of lead so best done in a well-ventilated area with gloves on. Bore cleaning solvents are kept off your skin and leave residual odour so it’s another benefit to gloves and I have once sprayed droplets of solvent into my face and tend to wear glasses when I’m working close into the gun. Rimfire, especially 22 LR tends to leave some unburnt powder residue too. This varies from brand to brand and gun to gun depending on the internal burn characteristics and pressure of the barrel. In some cases, it can be quite gritty, and you will feel it build up on the bolt shaft, the bolt face and breech face at the rear of the barrel will accumulate all of this rough, pasty fouling and it’s well worth using a brush or pick to clear the surfaces and small rebated crevices in the action where extractor claws and the like fit in position.

A few wet patches through the bore, breech to muzzle and not drawn back though, will push most of the fouling clear but lead is somewhat of a lubricant in its own right and coats the steel, somewhat protecting it from corrosion unless moisture gets involved. I leave the last patch to soak a while and clean other elements while waiting, then return and put dry patches through. I inspect these, how clean is it looking? You can repeat this process as many times as you want, and experience will tell you when enough is enough. Modern barrels are relatively smooth and tend not so accumulate fouling as badly as older, porous surfaces with decades of use and corrosion pitting. Hunting 22LR’s rarely ever wear out, they rust away. So far, I’m referring to bolt action rimfires and if you use semi-automatics, re-double your efforts and likely frequency to avoid build-up in the action that will cause stoppages.

If the rifle is really badly fouled, it might be beneficial to remove the scope and even the stock, this allows easier access for a more thorough clean, but you will need to check zero afterwards. Stock removal will allow you to clean around the trigger mechanism, this doesn’t usually fare too badly but if there is any corrosion attend to it and if years of lubricants have gummed up, you will need to use solvents and re-lubricate afterwards, follow the user instructions but in reality, an oily cloth wiped over surfaces has served well for decades. When adding any lubricant, do not use excessive amounts as all it does is soak into woodwork and attract dust, literally pinhead drops are all that is needed on pins and pivots in trigger mechanisms or extractor claws, the bolt shaft itself just needs that oily damped cloth, no more. Within the extractor, it’s worth checking in detail to make sure fouling isn’t embedded in the minute coils of the springs. I use a selection of picks in my cleaning kit to do this and just one grain of unburnt powder can be the cause of malfunctions. It’s also possible to use a bit of aerosol lubricant and blast out with an airline if you have one, just bear in mind using these pretty much dries any lubricants from wherever it blows so make sure you treat them afterwards. Again, less is more with all lubricants!

Moving to 17HMR, this is a little more like a centrefire, the bullet is jacketed copper so no lead residue to shave off. But the sopper itself can be microscopically shaved and ingrained into the fractionally porous surface of the barrel’s grooves and lands so these need cleaning when performance is noted to be affected with a good copper solvent and following the specific brand instructions. Don’t panic over this, you don’t need to clean every 25 shots but smaller bores like the 17 is relatively more affected by fouling so if you notice an accuracy drop off, it’s worth checking on the barrel’s cleanliness. The first few shots though any rifle being run-in will shave small amounts of copper from a bullet or even the case’s brass as it’s chambered but this soon beds in and shouldn’t be an issue long term.

I always recommend removing the moderator on centrefires for storage, but I rarely ever do this on a rimfire, there isn’t the combustion heat and friction to cause condensation forming and leaving moisture in the barrel like a 223 or 308 will. I clean my hunting 22……well I don’t, unless I have a specific problem. I haven’t cleaned the barrel in years, but I do clean the action as soon as I notice lubrication or lead fouling build up. My target 22’s get cleaned more frequently because they see a lot more ammunition use and are more critical to noticeable accuracy and consistency variations. I clean them every time I use them and that’s usually 50-100 rounds. I clean my own, and review 17 HMR rifles about every 50 rounds, or completed box of ammunition. I have known some far more susceptible to fouling issues than others and realistically, you can over clean rifles and it’s not uncommon for shooters to blame their gun for a missed shot that was just a bad shot, be honest with yourself and the consistency of the ammunition you are using. Take your time, use a gun cradle where possible to keep everything stable and keep a tidy space to place parts without risk of them falling on the floor and rolling away. Wipe the fouling off the tools you use, including the cleaning rid every stroke because there is no point doing more damage by cleaning than you are correcting for.

Bore cleaning solvents, regardless of how carefully you use them will have dripped or sqeezed into the action and it’s raceways so after the bore is clean and before re-assembly, clean the action and mop up and leakage. When everything is clean, re-assemble, we are gifted now with immediate cameras in our pockets so don’t be afraid to take a photograph before and after to check you put things back correctly, but you shouldn’t need to disassemble complex components. Don’t forget to clean magazines, the barrel crown and I always say the last thing that should touch the steel before it goes back in the stock is a wipe over with the famous lightly oiled cloth because fingerprints are corrosive. This, is how I treat my own rifles and all the review guns I deal with every year because my job is to treat them how any owner would to get a true representation of `average`, not a `one gun` specialist. 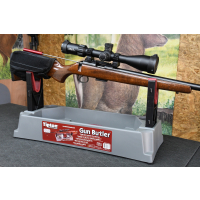 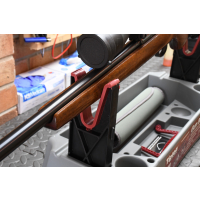 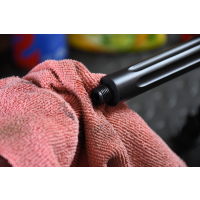 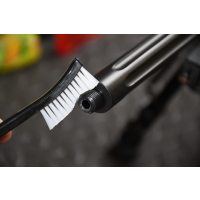 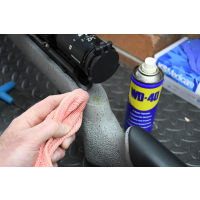 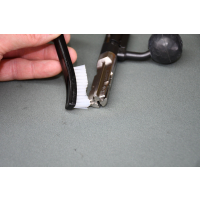 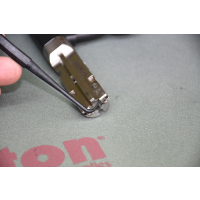 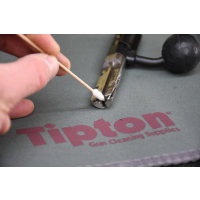 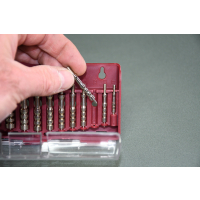 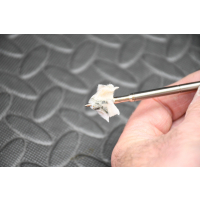 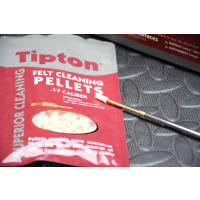 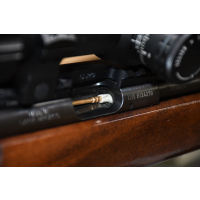 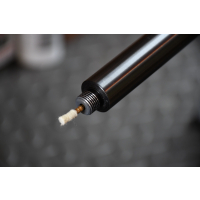 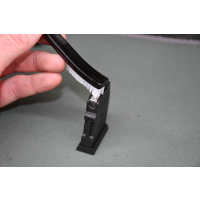 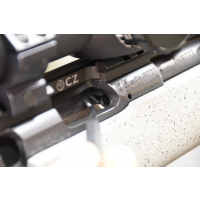 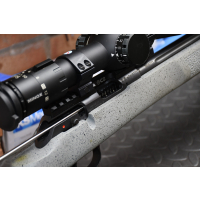 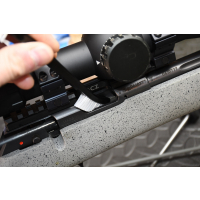 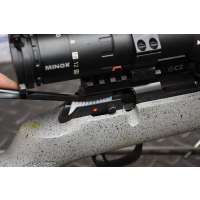 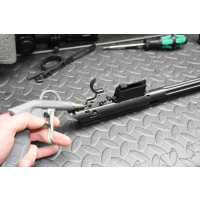 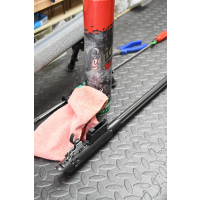 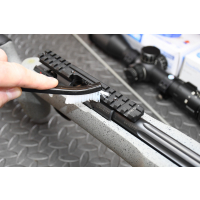 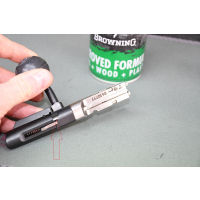 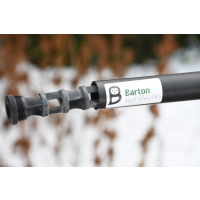 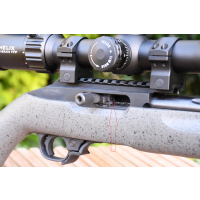